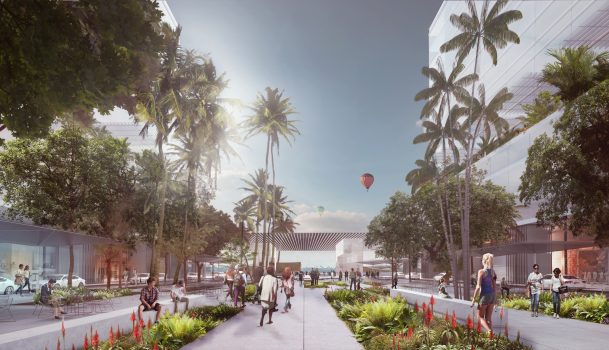 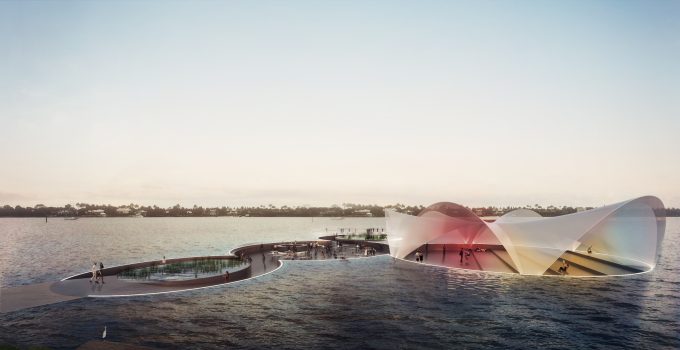 The master plan for the Currie Park waterfront of West Palm Beach will transform a 19-hectare vacant area on the coast of Lake Worth Lagoon, the narrow sea channel that separates the two cities of West Palm Beach and Palm Beach, creating a major new complex that includes housing, retail and leisure facilities.

A pair of leafy ramblas will allow people to stroll from the city center of West Palm Beach directly into the middle of the lagoon. Here, Carlo Ratti Associati will build a floating plaza that sits on the water, partly under the sea level, thanks to a system of responsive air chambers similar to the ones used by submarines. The floating peninsula will incorporate a series of public facilities, including an organic restaurant with its own hydroponic cultivations, a circular pool, an auditorium and a water plaza. The floating plaza, sitting on the safe waters of Lake Worth Lagoon, will be built upon a series of air chambers that automatically open and close, releasing or taking in water according to the number of people that are walking on the surface.

Back on the mainland, the master plan will coalesce around a newly expanded Currie Park, which will extend out across the city from its current waterfront location via a pair of leafy ramblas. The project will anchor a new, lively part of the city, featuring residential towers, a pool terrace overlooking the sea and a retail area that will include a food hall dedicated to organic products. The master plan will also reshape the waterfront’s overall terrain. On the north side of Currie Park, where a parking lot stands now, a gently sloping hill will be created, allowing pedestrians to access the area and opening up the view towards Palm Beach’s narrow stretch of land and the ocean just beyond it.