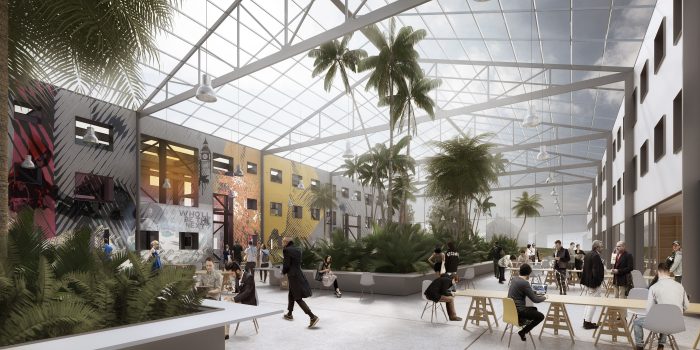 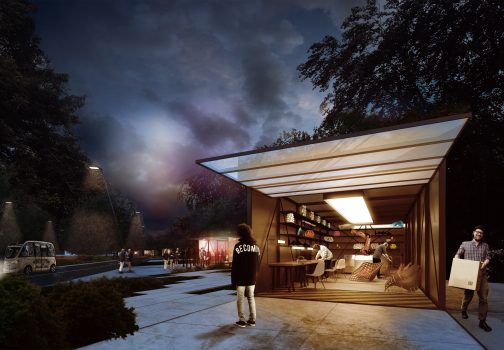 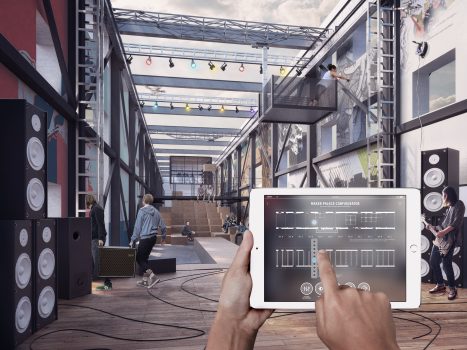 The project aims to establish a center for co-living, co-working and co-making, driven by a vision of cooperation and inclusiveness in the “Patrick Henry Village,” a former American military village on the outskirts of Heidelberg, Germany. The village will be transformed into a commune centered on multiple practices of sharing, for about 4000 like-minded people: the Patrick Henry Commune.

Life in the Patrick Henry Commune will leverage the benefits of shared infrastructure, assets and lifestyles at the urban scale. The design re-imagines the original village, playing off of its suburban-style architectural legacy. The architectural typologies of the American settlement, including several three-story housing blocks and detached villas with garages, will be either refurbished, partially demolished or connected to each other, shaping new, flexible spaces. Some derelict structures will be converted back into farmland, so that nature can further invade the site.

In the new “Co-living Blocks,” the spaces dedicated to common activities – such as shared kitchens and co-working environments – will outnumber the private residential units. The project will also promote solutions to mobility by offering a car-sharing service and a fleet of self-driving shuttles connecting the site to Heidelberg’s city center. The use of private cars will be discouraged, freeing up the villas’ garages for more creative uses. These will be converted into fab-labs, helping to bring manufacturing back to local towns and enabling new working models.

The project was elaborated within the framework of the Internationale Bauausstellung, or IBA, an initiative that, since the early 20th century, has promoted avant-garde architecture ideas in Germany.

CREDITS A project by Carlo Ratti Associati for IBA Heidelberg Carlo Ratti Associati Project team: Carlo Ratti, Emma Greer, Oliver Kažimír, Gary di Silvio, Alberto Bottero
Let’s stay in touch! Subscribe to our newsletter to get monthly updates from CRA
We use cookies on our website to give you the most relevant experience by remembering your preferences and repeat visits. By clicking “Accept”, you consent to the use of ALL the cookies.
Cookie settingsACCEPT
Manage consent